It seems that hardly a week goes by without there being an incident somewhere in the world involving terrorists or others with malicious intent attacking crowds of people in public spaces. Marauding gunmen or suicide bombers are attracted by locations that offer a combination of the ease of access and ability to cause maximum casualties. In considering how to combat this threat, many site owners or venue operators dismiss the idea of installing ‘airport style’[1] security screening at entrance points as impractical on a number of levels. It has a large footprint; is expensive, and is highly likely to dissuade visitors. No one wants to go through an intrusive screening process each time they go shopping, or to watch a sports match, so such measures will damage the business. Consequently, the ‘do nothing’ option is often the security default. Is there a middle ground?

This article explores how a combination of technology, people and the process can give entertainment venues, sports arenas, visitor attractions, shopping centers, etc., options through which they can reduce the risk of mass casualty attacks without inconveniencing their visitors or business.

The basic challenge is illustrated in Figure 1. 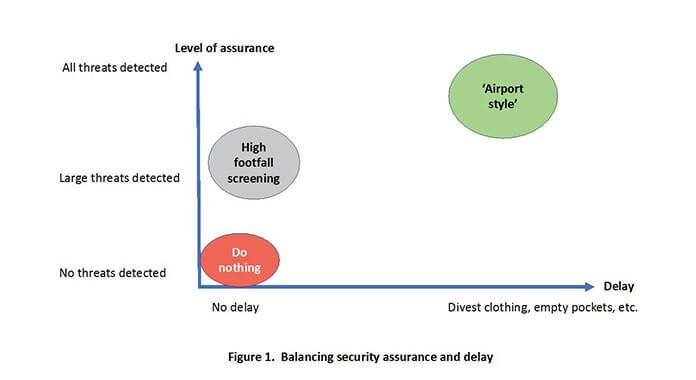 [1] The level of security screening that takes place prior to boarding an aircraft at any major airport. This involves divestment of clothing, emptying of pockets, removing belts, etc., and passing through a metal detector arch.

‘Airport style’ screening delivers a very high level of security assurance, but at a cost to both the site and the visitor. Doing nothing is cheap but without any threat mitigation. The aim of high footfall screening (HFS) is to seek a compromise position, but its exact location in this matrix will be dependent upon a number of factors including the prevailing threat, the level of footfall and the desired level of visitor experience (i.e., making them feel both welcomed and safe). Achieving the latter could well see security as enhancing the business, rather than having a negative impact as is so often the case.

A number of innovative technologies are now available to provide security managers with a range of options by which they can implement an HFS strategy at their sites. This is characterized by no divestment of clothing, emptying of pockets, etc., and a screening process that should have no impact on the overall flow of people, except where possible threats are detected. However, technology alone will not suffice. It needs to be operated by empowered security staff who use it to support their decision making about who might represent a threat. The human eye, training and experience remain a highly powerful tool; new technology can enhance that capability.

It is important to recognize that these technologies will not provide the same level of security assurance as that in the airport central search. There is a compromise between the desired level of assurance and the time taken to achieve that. These technologies will, if operated with an appropriate concept of operation, enable security managers to manage much better the threat posed by someone seeking to enter their site with a large concealed weapon or a suicide vest. The size of these items is such that they can be detected on people moving at a normal walking pace and without the need to divest clothing and, in some cases, empty bags.

At some sites, the security strategy is to select a random number of people for screening, e.g., a ‘pat-down’. Other sites may search every bag entering, but leave those without bags unscreened. Yet others operate a combination of these. These approaches leave gaps which those with malicious intent can exploit. The concept behind HFS is that everyone entering the site is subjected to a level of screening that will detect major threat items. Smaller threat items may go undetected but the really damaging ones will be stopped.

The technologies fall into two broad categories: large metallic threat detection (LMTD) and stand-off threat detection. The market in metal detection technologies has been driven for many years by airport security where the emphasis is on detecting small amounts of metal where none is expected (i.e., after the divestment of clothing and emptying of pockets at central search). But the challenge in high footfall screening is to allow innocent items such a mobile-telephones, wallets, watches and keys to pass-through. This requires the screening technology that is capable of differentiating between innocent and threat items. A number of companies have developed specialized LMTD systems to do just that, by recognizing the relative metallic signatures of threat and non-threat items. This is by no means an exact science – two innocent items close together might be mistaken for a single, bigger threat – but these technologies now offer security managers options for their management of risk.

The second class of technologies is those capable of detecting potential threats at a distance (normally in the range of ~3 to ~15 meters). Some systems use passive millimeter wave technology to detect areas where the body’s natural radiation is blocked by something solid (e.g., a weapon or a mobile telephone); the operator has to decide which is which. Other systems direct (low powered) radar at the individual and use sophisticated software to interpret the reflected energy. The software is ‘trained’ to ignore innocent items, but raise an alarm on possible threats. Some technology providers are now producing systems that combine LMTD and stand-off detection technologies.

Of course, threat items may also be concealed in bags as well as on the body. Some metal detection systems can identify major threats in a bag carried by the individual, but non-metallic threats will not be detected. The stand-off class of technologies cannot penetrate bags. Figure 2 tabulates the detection capabilities of the classes of systems. 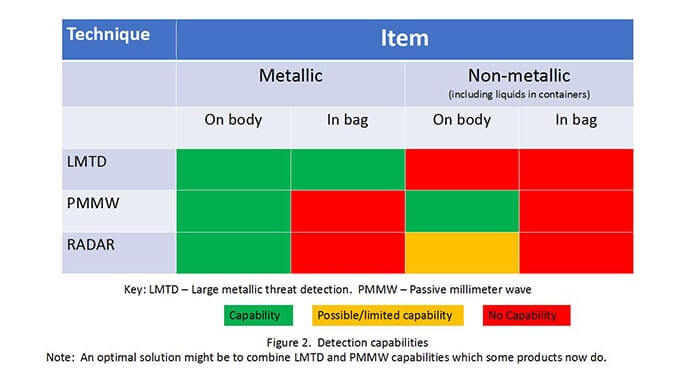 For greater assurance about the contents of bags, a hand-search or use of an X-Ray machine is the only alternatives. The drive for faster throughput in airports has led to X-Ray systems of very granular detection capabilities, but at a cost which is beyond many sites seeking the HFS approach. The challenge for technology providers is to produce bag screening equipment that takes the same approach as that for people – where the focus is on the rapid detection of major threats while recognizing that smaller items may go undetected.

These technologies offer security managers ways of implementing an HFS strategy at their sites. But every site is different – the characteristics of people entering a shopping center are very different from crowds visiting a museum or fans at a sports ground. So it is important to understand which technology is best suited to which type of site.

There are three broad ways to characterize the general flow of people who need to be screened for security threats.

Placed alongside each other, these environments are also useful ways to illustrate the increasing levels of control, the percentage of people screened and security assurance as shown in Figure 3. 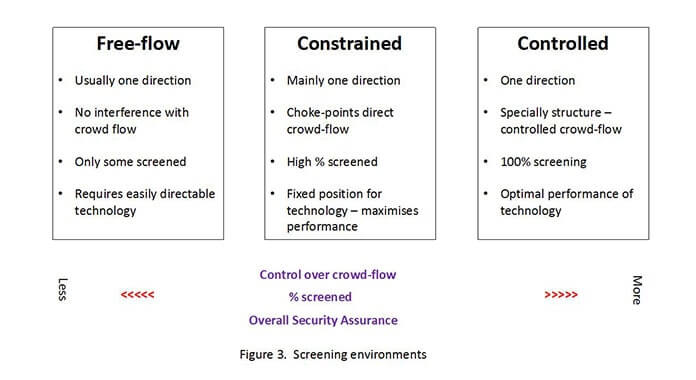 A key issue for all of these environments is the response to an alarm – what happens when the technology detects a possible threat. Such alarms are never clear cut (e.g., “automatic rifle detected”). Whilst they signal this in different ways, the technologies simply indicate that they have detected an anomaly that needs some form of intervention to resolve. This will normally involve speaking to the individual, asking to open a coat, etc. In extreme cases, it may be necessary to call for Police back-up.

All of these technologies can be operated from a remote location (e.g., Control Room) and alarms transmitted to staff on the ground via radio. This may be suitable in Free-flow environments, provided that there is also the capability to track an individual via CCTV. However, it is normally undesirable to allow an individual of concern to well be inside the site (and thus mingling with others) before a response can be mounted; possible threats should be stopped as early as possible. To this end, most interventions will take place close to the detection technology. This arrangement also enables security staff to devote much of their time to welcoming visitors and encouraging them to feel safe.

At some sites, there may be space to consider HFS processes in only one environment. Other sites may be large enough to encompass all three in an increasingly granular level of screening: free-flow on the outer perimeter; constrained at the entrance to a building, and controlled at an inner area or more sensitive zone. See Figure 4. 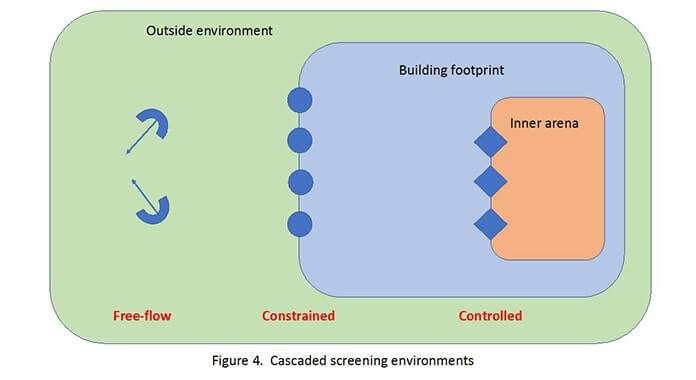 The constrained environment should not be seen as ‘Airport style’ security by another name. Visitors should still be passing through with the minimum of interference, etc. This may also offer opportunities to conduct a more detailed screening of the contents of bags through the use of X-Ray machines or even a separate hand search. Where either technique is deployed, it is often the case that people screening takes place much quicker than that for bags, so careful consideration needs to be given to the layout of the various technologies and the optimal flow of people through them.

Despite the recent advances in the technology described here, one of the most powerful security tools remains the human eye. An experienced security officer can use judgement and experience to often greater effect than any number of machines. Training security staff in behavioral detection techniques will enhance their natural curiosity and enable them to focus their attention more effectively. All HFS activity thus needs to be seen as a combination of people, technology and process. The technology should provide the security staff with a rich source of information upon which to make judgements; it should not be obeyed slavishly. The staff who are encouraged to embrace technology and use it to support their decision making thus have the capability to provide a welcome to a site with the minimum of interference but the maximum of security assurance. That is one of the key aims of an HFS strategy.

The classes of the technology described here represent only the beginning of what is hoped will be a rich landscape of innovation to counter the threat of mass casualty attacks and enable people to go about their daily lives freely and with confidence. 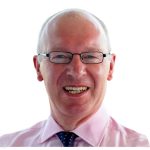 Roger is a former senior manager in the security and intelligence sector of the UK government. He was the Director of the UK Government’s first inter-departmental cybersecurity organisation and helped set-up the Centre for the Protection of National Infrastructure (CPNI) in 2007. He has advised a number of European and Middle East governments on infrastructure protection and other security strategies. Roger joined a global infrastructure design and engineering consultancy in 2012 to develop their concept of ‘holistic security’ – an integrated approach that seeks to break down the silos so often present in the security space. Roger now runs his own security consultancy with a particular focus on the protection of crowded places from mass-casualty attacks. In 2017 he won funding from the Home Office and CPNI to deliver a series of trials designed to improve the security of crowded places in the UK. The ‘High Footfall Screening’ (HFS) project aims to give entertainment venues, sports arenas, visitor attractions, shopping centres, etc., an insight into how developments in security technology can reduce the risk of terrorist attacks without inconveniencing their visitors or business. The project challenges the received wisdom that the only options for protecting crowded places are “airport-style screening” (cost-prohibitive, slow, detrimental to visitor experience) or “do nothing” (cheap, no security assurance). In November 2018, the HFS trials won ‘Counter-Terrorism Project of the Year’ at the Security and Fire Excellence Awards.

PropTech: How is It Affecting the Real Estate Market?

The Best Antivirus Software for Mac in 2022

PropTech: How is It Affecting the Real Estate Market?