1. FinTechs will contribute to a recession

I hope I get this wrong!

However, credit risk is slowly building and FinTechs are contributing to the risk.

US student loan debt is at a record $1.465 trillion; more than double the $675 billion outstanding in June 2009, when the recession ended. According to a recent study by Bloomberg, one group of young adults that took out loans in 2012 have defaulted at a faster rate than any other loan cohort since the financial crisis. This group of young students are generally having a hard time paying back loans as many are generally establishing their careers having entered the labor force when the unemployment rate was twice as high as today.

FinTech startups such as SoFi, CommonBond, Lendkey, etc. offer student loans and other refinancing products at the convenience of the young segment’s fingertips, often at attractive interest rates, have lent to a significant portion of this young segment. On the other hand, banks too are taking greater risk in issuing student loans in response to the threat by neo-banks and FinTech startups. In 2019, this is expected to continue which will contribute further to the credit risk in US market leading to early signs of a recession.

The technologies we will see much more of in 2019 are artificial intelligence and machine learning, which have clear applications in financial institutions, such as automating manual tasks, for e.g. reviewing thousands of manual contracts that often take hundreds to thousands of hours, enable simple conversations in a chat environment as opposed to navigating several pages on a website looking for information, and identify and eradicate fraud activity. Regulatory reporting and compliance is also likely to be a major target for AI-driven innovation given how manual and friction-full these processes are for many financial institutions.

We’ll see AI dominate in 2019, not as a product itself but as a crucial ingredient in the middle and back office technology. So while it won’t be recognizable by consumers, it will start to become much more pervasive in financial institutions.

The concept of Open APIs involves banks opening up their data to third parties via consumer consent. By opening up customer data in a secure way, banks allow third parties to design their own applications as well as services around the data using APIs. Open APIs does not mean banks will have to share data without proper monitoring and permission, given the legitimate security and privacy concern surrounding financial data.

In 2019, banks will feel even more pressure from FinTech firms and Big Techs sweeping away their customer base and open access to data and other banking services to co-create new products and experiences. Use cases range from new interfaces for financial data, alternative underwriting and lending, facilitating new payments streams, and the opening of ecosystems. While it may be very early to predict any winners and losers; 2019 may prove to be a pivotal year when banks become much more active in executing their Open API strategies.

In 2018, hundreds of pilot projects were launched, execs eagerly talked up distributed ledgers, and some economists predicted 10% of GDP would be on the Blockchain by 2027; others said billions of dollars in transaction processing costs would be cut. The bubble got even bigger!

The main issue with Blockchain is the hard reality of implementing it; banks can barely handle IT upgrades. In addition, there are several different distributed ledger platforms to choose from, decentralization is not necessarily an advantage for banks, and the costs vs. benefits of using Blockchain is not yet clear.

One Fintech entrepreneur stated: “We tried Blockchain for about one day. Everything became three times slower. So we stopped.”

Does this mean that Blockchain will be pushed aside for now? Absolutely not! Cloud computing went through its own hype cycle before it was reborn as an essential piece of IT infrastructure. Blockchain is a revolutionary technology and will transform banking as we know it today; and in particular how we move, store, and transfer financial data and assets.

2019 will look similar to 2018 but expect two Blockchain use cases to pick some scale in 2019; one in Trade Finance where Blockchain removes intermediaries and unlocks frozen capital to enable efficient trade. The other is governments and central banks introducing digital currencies to complement its paper based fiat currencies to reduce cost and theft involved with cash printing and handling and also to serve as a monetary policy tool to adjust interest rates.

There will be “no slowing down” of investments in FinTech startups in 2019. FinTech startups will continue to attract more deals, bring steady stream of checks from venture capitalists, and swirl IPO rumors.

2018 saw a number of FinTech startups that came into their own. Stripe Inc. was valued by investors around $20B, which is higher than the market cap of 249 companies on the S&P 500 Index. GreenSky, which provides loans for home improvement projects, became one of the largest FinTech to have raised over $800M in an IPO. Ant Financial, which owns China’s largest payments platform, reached a $150B valuation. Southeast Asia’s ride hailing firm, Grab crossed $10B in valuation. But the industry is also maturing as well as consolidating, and larger industry players, hoping not to be left behind by the new era of digital finance, are stepping up their hunt for acquisitions.

2019 guarantees to be another exciting year for FinTech and I’m looking forward to it! 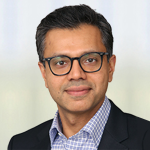 Head of FinTech, Digital Banking at KPMG US

Safwan is a Digital Financial Services leader with a track-record of managing and launching digital businesses and products in banking with focus on digital transformation, digital enablement, and innovation. His career span includes working for both Technology and Financial Services firms across roles that spanned corporate strategy, managing and launching digital products, and digital transformation. He currently leads the Fintech program at KPMG.

Need To Be Right, Just Once

The Future of Enterprise Mobility

The Future of Enterprise Mobility