by Gracie Johnson
in Media & Entertainment

If you have seen the movie ‘Iron Man,’ you would have noticed the technology embedded in the titular character’s helmet that expands the physical world by leveraging robust digital projections. This wonderous tech is called Augmented Reality (AR).

Even though augmented reality has been around for a long time now, it is the new kingpin for all the new cutting-edge technology platforms and devices. Modern life is all about the magic of AR. It is being utilized for more than simply movies and headphones now.

Continue reading the following post and learn more about augmented reality and its vivid applications.

That is, however, different from Virtual Reality. Augmented reality adds computer-generated images and digital information to an image of the real world. It adds video, infographics, images, sound, and other things to change how people think.

Augmented reality gives you information about the things you can see to learn more about them. It makes the screen look better by adding things from the real world.

When using AR glasses, a person may view the natural world and the virtual world around them. Since its inception, AR has been used in gaming, education, and training, among other disciplines. Most of it is implemented as AR apps for phones and PCs. It now includes GPS, 3G, and 4G mobile phone technologies and remote sensing.

Take a look at four types of augmented reality as follows.

Uses location-based information to decide what content a user sees or gets in a specific area. This technology is used in apps for events, business, and navigation.

The 3D digital animations are started with a marker, a unique visual item such as a special sign or anything, and a camera. The system will calculate the market’s orientation and position to position the material efficiently.

This type employs synthetic light projected on physical surfaces to detect users’ interactions with them. It is used in holograms, such as in Star Wars and other science fiction films.

In this case, the original item is entirely or partially replaced with an augmentation. For example, it can even demonstrate how users can scale a virtual furniture piece over an image of a room. i). Sensors and Cameras

AR cameras or other cameras, such as those found on smartphones, take 3D photos of real-world objects to send for processing. Sensors gather information about the user’s interactions with the app and virtual objects and send it to a processor.

To process 3D images and sensor signals, mobile phones use graphics such as flash memory, Bluetooth, GPS, and other technologies. They can measure things like speed, orientation, and direction.

The process of displaying created simulations onto AR headset lenses or other surfaces for viewing is known as AR projection. A small projector is used for this purpose.

On AR devices, one can use reflectors such as mirrors to assist in viewing virtual pictures. Various small curved mirrors or double-sided mirrors can help reflect light to the AR camera and the user’s eye to align the image properly.

A particular device that displays augmented reality data on a transparent display. It was first utilized in military training, but aircraft, automobiles, manufacturing, sports, and other fields actively use this technology.

These are worn such that they can come in contact with the eye. Lenses with additional functionality, such as the capacity to take images or store data, are being developed by companies like Sony.

Many real-life examples use AR. However, the most common ones are as follows.

IKEA is regarded as one of the first firms to use augmented reality well in the tech industry. In 2012, shoppers could use the app to visualize how tables and shelves would look in various locations around the house.

When buying furniture, it’s essential to consider how it will blend in with the room’s theme. This app allows you to select any item from the IKEA catalog and see it scaled to any room in your house.

You can use this app to do your make-up. This is similar to how IKEA’s app works. Virtually, the app shows you how your face would look with a certain shade or color of an item. Besides L’oreal, many other apps are now using this app.

Besides App usage, there are many other fields where AR can be used. 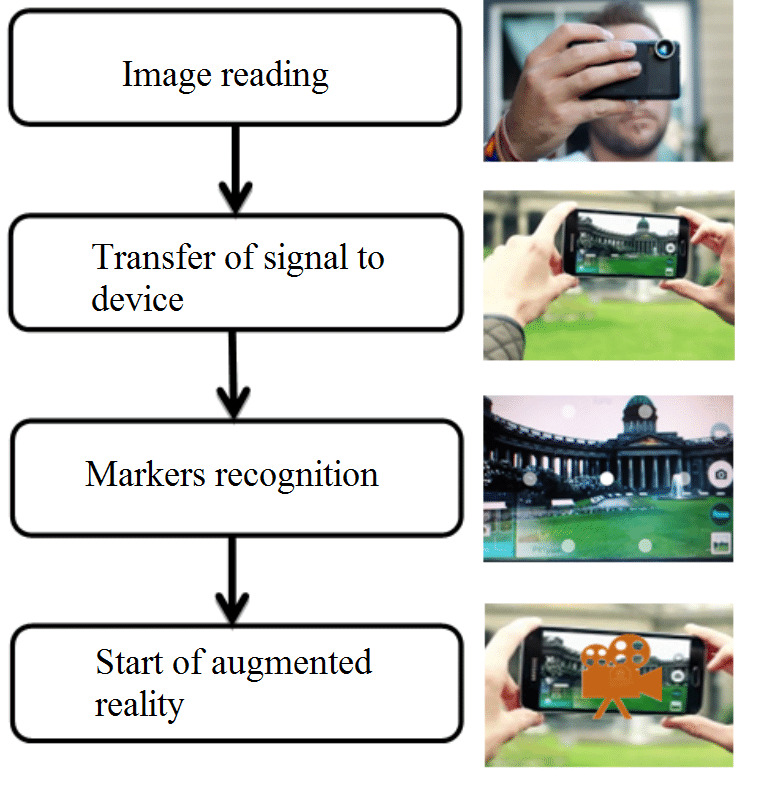 AR technology enables real-time augmentation, which occurs within the context of the surrounding environment. Users can view objects in natural and synthetic light using animations, pictures, movies, and 3D models.

How to Develop an Augmented Reality App 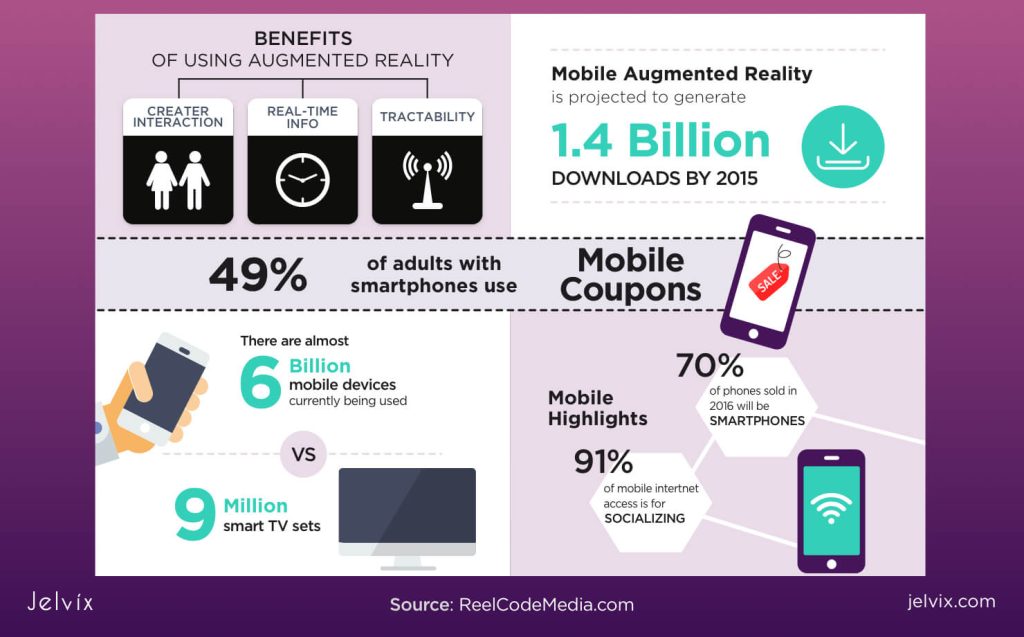 It’s easier to build an app if you take tiny steps at a time, even with new technology. As a business owner, you should follow the below stages when creating your app. Let’s have a look at each stage in detail.

1. Insights into the Consumer Market

Investigating the market is more accessible by using related apps from the Google Play Store or the Apple App Store. Make a list of the features you like and don’t like in other apps to see where you can make improvements.

Check out their speed, responsiveness, user experience (UX) design, and other metrics. As a result, you’ll be able to see where your consumers are having issues, and you’ll be able to incorporate new features to remedy the situation.

You can also solicit input from individuals you trust, such as family members, coworkers, or anybody you know. Check to see if the concept is helpful to them and, if so, what characteristics they feel are missing.

2. Decide on Your Needs and Goals

Determine your needs after you’ve done market research. The following is a list of things to consider when developing an app. In addition, it will be easier for you to communicate your needs to app developers. For example:

At this point, you’ll want to get in touch with the AR professionals, who can listen to your needs and provide solutions accordingly. However, before you do that, you’ll need to find a business that has previously developed AR apps.

The following aspects should be taken into account when looking for an AR development business:

To provide the greatest possible service to customers, you should begin working with developers as soon as possible after hiring them. Make sure you’ve discussed your concerns with the development team and that they have a clear understanding of your needs. You may then begin the development process’s crucial step.

Take a look at the page’s title, subtitle, category, keywords, launch icon, and images. Depending on the quality of your software and how well you adhered to development rules, the App Store submission process may take a few days.

On the other hand, Google Play Store does not have a review process, and your software will be ready within a few hours of submission.

Who is in Need of This App?

Virtual reality (VR) applications are being developed by major corporations, including Apple, Google, and Facebook. As a result, AR’s greatest advantage is that it can be employed in various industries, not only entertainment technology. Education, military, manufacturing, e-commerce, and many other sectors are included in this category.

By 2025, video games will possess the most market share of all. There were more than one billion downloads of Pokémon GO in 2019, an example of augmented reality (AR) technology.

It’s all about providing a great user experience and increasing the relationship between your customers and your brand with this technology. When interacting with your customers, AR technology can help you do so.

Virtual Reality (VR) creates an immersive experience by blocking out the actual world using sensory equipment such as VR headsets. On the other hand, augmented reality combines the physical and virtual worlds by superimposing digital components on top of the real environment.

2. Is it expensive to use augmented reality?

Augmented Reality applications are varied, and their pricing varies based on their application. Creating augmented reality can cost absolutely nothing on certain free apps. And they can also cost thousands of dollars in development alone. Moreover, these developmental costs also vary between markets and countries.

AR is sweeping the globe, and it may be the fastest-growing part of extended reality at the moment. Since new firms invest in smart glasses and other products, the augmented reality sector is constantly changing.