Ellen Voie,
President/CEO/Founder of the Women In Trucking Association

What do you see when you are driving along a four lane highway and there’s a tractor trailer next to you?  Do you see smokestacks, diesel engines and a massive machine spewing fumes into the air?

If so, you need to move your perception into the 21st century.  No longer are the tractor trailers of the past even similar to what’s coming off the assembly line today.  The trucking industry has embraced technology faster than many industries, but it’s not just about efficiency, it’s also about safety.

Step into the cab of a 2018 semi tractor and you’ll be amazed at the number of gauges, switches and knobs. What you don’t see is an oversized steering wheel and two shifting gears connected to the floor.

In fact, the interior cab of today’s truck resembles your car more than you realize.  First, the truck has been designed to be more ergonomically correct for all body sizes, which means women are now more comfortable in the driving seat than in the past.  Look at the way the dash slopes to accommodate the view out the passenger’s side.  Check out the pedals that are adjustable to adjust to husband and wife teams when one is much taller than the other.

The creature comforts inside the cab include refrigerators, microwaves, more closet space and often a porta-potty.  Lighted cup holders and even 220 outlets in the sleeper berth make it more like home.

What you might not have realized is how clean today’s trucks operate.  Due to EPA standards, many trucks actually leave the air cleaner than when it went into the engine.  The addition of DEF, or diesel emission fluid, has created much cleaner exhaust.

The EPA Smart Way program also provides guidelines for fuel economy. From low rolling resistance tires to aerodynamic hood shields, trailer skirts, wheel covers and “tails” on the back of the trailer, diesel fuel savings in the range of ten percent or more can be realized.

Today’s trucks are also safer than your grandfather’s rig.  The opportunities are endless to provide technology to reduce driver error by relying on these devices.  From personal safety to safely on the road, there are more opportunities to make our roads safer for all of us.

Lane departure warning equipment, anti-rollover devices, side guards and speed monitors are all becoming common additions to today’s trucks.  Some carriers are now replacing mirrors with cameras so the driver has a better view of the space around the 53 foot trailer.

Personal safety is also a concern, and instead of experiencing worker’s comp claims from cranking dollies or pulling the hood open to inspect the engine, we now have devices that raise and lower the landing gear with the push of a button.  There are hydraulics that open the massive hood and even cameras the show whether your king pin has been secured or not.

Add to all these technological advances the promise of autonomous trucks and your tractor trailer no longer looks like a mass of smoke and diesel fumes.

The trucking industry has adopted advanced technology; not only to comply with government regulations, but to reduce its footprint on our ecological resources as well as make the job much safer.

The next time you see a tractor trailer alongside of you on the highway, consider how technology has created a new era of load delivery.  These are not your grandfather’s trucks today. 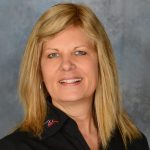 President/CEO and founder at Women In Trucking Association

Ellen Voie is the President/CEO and founder of the Women In Trucking Association, formed to promote the employment of women in the trucking industry, address obstacles and to celebrate the successes of its members. Voie’s prior role was Manager of Retention and Recruiting Programs at Schneider after serving as the Executive Director of Trucker Buddy International.
Voie is a Certified Association Executive. She holds a Class A CDL and a private pilot’s license.
She has been honored by the White House as a Transportation Innovator Champion of Change. She received the 2015 “Distinguished Alumna of the Year” award the University of Wisconsin-Stevens Point Division of Communication. Voie was named one of Supply & Demand Chain Executives magazine’s “2016 Pros to Know.” In May, 2016, she was chosen as one of Fleet Owner’s Dozen Outstanding Women In Trucking. In 2017 Voie was named to Insight Success Magazine’s “The 30 Most Inspirational Leaders in Business” and "The 30 Most Innovative CEOs To Watch."
Voie was appointed to the FMCSA’s Entry Level Driver Training Advisory Committee. She serves on the Board of Directors of the Wisconsin Motor Carrier Association and is a member of the Wisconsin DOT’s Motor Carrier Advisory Committee.